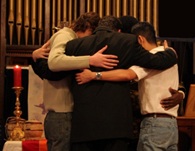 Do you remember when you first walked into an MCC?  For me it was June 1991, MCC North London. I remember being so nervous going there. I was sure that this would be a great big bunch of misfits playing church.

Turns out that it was a great big bunch of misfits, but they weren’t playing church, they were church; and at my very first MCC service I met Jesus.

I can’t really explain what happened. It was during communion. I was praying hard, hoping for some kind of enlightenment that would reveal what the motivation of these people really was. (I couldn’t believe they were genuine).  Folks went for communion, both young and old, straight and gay, lesbian and Trans, and many came away crying. Crying. I couldn’t work it out.

Then suddenly, I was in the presence of Jesus. Nothing had changed, but everything had changed. The people were all the same but somehow they’d all changed. God’s Spirit filled that room and Jesus was present in a way that I’d never felt before.  And I knew it was Jesus. It wasn’t just some ‘nice’ feeling that connected me to those around me. This wasn’t some emotional high brought on by carefully orchestrated music (in fact, if I remember rightly, the piano player hadn’t showed and the congregation sang all the songs a cappella – and badly). There was nothing I could see that was special about this group of people, this room, this service – that I could put my finger on. But this was Jesus. No mistaking him.

My life would never be the same. There’s been some ups and downs. When Pastor Gill Storey left MCC North London I was devastated. When folks said I should be a minister I laughed. When God called me to go to read theology at Kings College I was perplexed. When I moved to New York for Chris I didn’t expect to be running an MCC emergency shelter for queer youth. I certainly didn’t expect to get called to this wonderful little church near the Mason-Dixon line. If I’d not gone to my first MCC service life would be very different indeed.

Today we celebrate 43 years of MCC, and I wonder how many folks out there are getting ready to visit an MCC for the first time? Some in Russia, some in South America, some in Malaysia, and some right here in Hagerstown. They have no idea that Jesus is waiting for them. They have no idea what’s going to happen.

I don’t know how the MCC experience will change them. Some a little, some profoundly, but every single one will be changed in one way or another, all because of a bunch of folks, living on the margins, who dare to go to Jesus and offer themselves in worship. All because of this strange group of people who dare to step out in faith when prejudice and hate demands they cower in fear. All because of the love of our Awesome God. Thank God for MCC!!!